In episode 103, round-table 1 I spoke of a 2×4 wooden hive stand that I liked from a Pintrest photo.  I tried to describe it but didn’t feel to successful and vowed to provide photo evidence.

Stupid Simple
I like the design because it is stupid simple.  In a Kevin kind of way if I were ever to build one I think I might consider how strong it is and determine if it would need reinforcements for whatever reason. 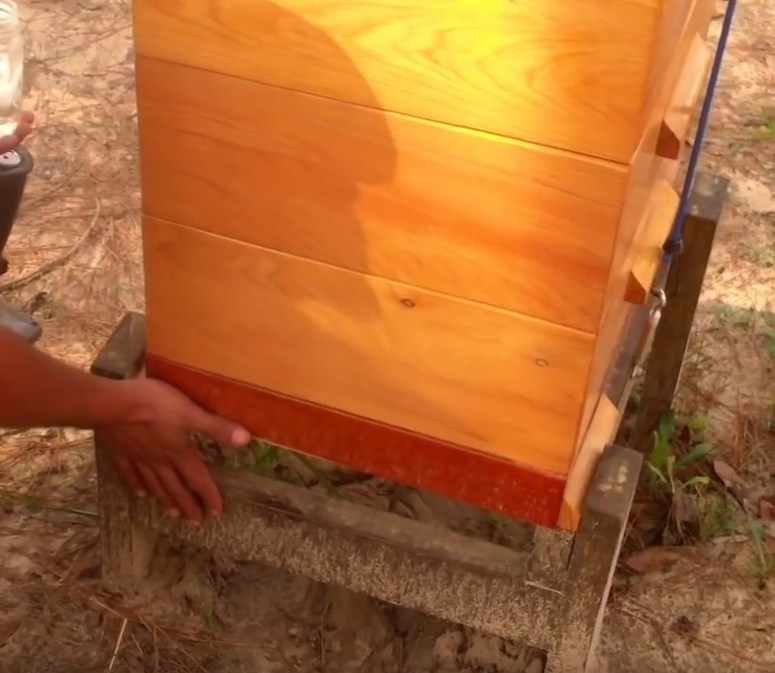 Note: This is not my hive stand!!!!!  I found a photo of it and I am commenting.  I could not find the source so forgive that I don’t have dimensions or any details on how to make it.

Will it stand the test of time?
If you were to build this stand would it hold up over time, an interesting question.  Wood gets wet, and dries out, and gets wet, and dries out.  It is the nature of the beast.  The weak spot of a device like this would be the fasteners that hold it together.  I have wooden railings for a trailer I own and over the years the holes where the lag bolts are have simply egged out and loosened up.  I suspect that with the movements of working a hive, wind, and such that the fasteners that would secure the hive stand would be subject to loads that would cause them to free up and create sloppiness.  Much the way an old chair wobbles, no amount of glue or fasteners will make wood last forever.  So there will be a lifespan for something like this but alas, stupid simple, cheap, easy to build and more importantly I supposed – easy to replace when worn.

IMO Stand-Alone is the Way to Go
I like to gravitate to stand alone hive stands like this.  I personally feel that as a beekeeper you should be able to approach a hive from all sides.  Having the hive supported on an individual stand is an important aspect of beekeeping in contrast to having a hive on a rail.  Many beekeepers I know keep their hives on two 8 foot 4×4 posts layed out on cinder blocks.  My conjecture is bees can sense movement and vibration and everything you do to one of the hives on the rail translates down the line to the other hives.  That might be ok, or it might be enough to incite the other hives to some kind of call to alarm or wake them up and induce robbing and such.  To each his own they say, but the single hive stand is the way for me.