This past weekend I had a few moments so I started poking around looking at different hive form factors.  I spoke of some that I previewed in Episode 106 and wanted to expand on a facet of hive design that has my interest right now.

Disclaimer:   I know this is not a new idea and I am not trying to pass it off as a new idea.  This is how I think out loud and document my methods of where I am at any given time.  I am adding this disclaimer as sometimes well meaning folks can’t help but share with me that so and so had this idea before and it is not original. In this post I am simply taking some time to work it out for myself and as customary I am taking you along for the ride if you care to follow. 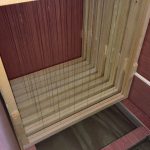 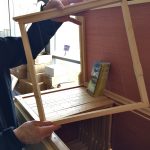 9 1/8th Inch Because of Weight
It is not a new concept but there is an underlying concept with the design in the photo.  If a bee had a cavity to build a comb for use would they constrain it to the size of what we provide in a Langstroth box?  No probably not.  It is not designed for the bee, it is designed for us.

Consider that a Langstroth frame dimension for foundation is around 9 inches (40 centimeters) and it is that height is that dimension because if made any bigger the box that contains it, and the other 9 frames, would be too heavy.  Its shape and dimension are a matter of practicality in a system that was built to be movable.

Would the Bees Prefer a deeper Frame?
If we could all be superman and weight was no object, would we have designed something differently; I think we would.  Practicality would take on a new meaning and the height of a frame would would not be constrained by the weight incurred by way of its dimension.  It might not be evident but using a deep box dimension is a compromise between weight and providing the largest comb surface for the bees to operate.  As an aside, there’s a knock on all medium hive setups – meaning using all medium hive boxes instead of combinations of deeps and mediums – as they might lessen the box weight but there’s a bar every 6 inches and that interrupts the continuity of the face of the comb for the bees.  So to the question, would the bees prefer a deeper frame?  Let’s hold off on tackling that question for a second.

Smaller Nests and Frequent Swarming
An article from J Loftus, Michael Smith, and Tom Seeley has been out about a year now that implies that smaller hives and the willingness to let them swarm results in healthier colonies.  Bob Kloss and I talk about his little top bar hive that he has and we’ve pondered, even out loud on the podcast, why that hive seems to thrive and survive.  It has a touch of the recipe that I am exploring here with the notion of collapsing two deep brood boxes into one continuous box that is a bit smaller in dimension. (Link to the Smaller Nest Research Article)

So what if we considered…
What if we built this hive for the hobbyist, and didn’t intend to be moving it on pallets?  What if a hive was a single box for the brood chamber?  What if we employed deeper frames with large expanses for comb?  What if it was insulated or used substrate that was as thick as a tree?  I’ll go even further of what if it were suspended and secured high up in a tree?  What if it employed a pulley system so we could lower it to the ground to work on it.  What if it were allowed to swarm?

If one could shape wood, and if one could lift any weight they wanted…
Let’s brainstorm a design?

Objective: Compromise between making something exotic and using off the shelf components and standards if they work in the design – but the bees come first.

What should we change about the hive dimensions and components?

What do we end up with?
It is a hive box with standard Langstroth X by X length and width dimensions, its contiguous depth is akin to the height of a medium sitting on top of a deep box for the brood chamber, and has a closed curved bottom.  Objective met: One contiguous brood chamber.  The hive box is made with substrates that are thicker in dimension, say 1 1/2 or 2″ lumber, and therefore more insulated.

What would be the possible benefits of this design?

What would be the downside of the design?

Conclusion
I built a top bar hive and have it in service this year – hopefully it will continue along to spring, fingers crossed.  I will given another go at getting my Warre hive up and running this season and there are two homemade hives i’m interested in giving a go if time allows;  This modified Langstroth and something like the Hex hive that was covered in episode 106 (https://youtu.be/L1lHXvbcBpo).  I suppose one question about that hive is what’st the difference to what was proposed here.  It’s pretty similar but more complex due to the ‘hex’ nature of it.  Given the thickness of the substrate would the extra space created by the hex design add enough value to warrant the complexity?  All good questions.

We’ll see where the summer of 2017 takes us.  This actually would be a better winter project but maybe early spring will provide some opportunities to get into the workshop.