As a young boy, I can recall weekly Sunday dinners at my father’s parents’ home. My grandmother, we called her Nan, would make the most amazing Italian food in a very traditional style and there are many fond memories of food prepared simply, properly, and from fresh garden vegetables and grandmother skill. Dinners were amazing, and so too were the desserts.

Cannoli were not the frosting sugar bombs passed off today but handmade shells filled with the most amazing blend of smooth ricotta with a hint of lemon, and sometimes even mini chocolate chips. Another dessert stood out and it was like cannoli’s on kill – Noodle Pie. I have never been to anyone’s house or any restaurant and had noodle pie, never. Only Nan’s and I remember going to her home at Christmas time and anticipating this specialty that only she prepared. While noodle pie is an acquired taste, it is something that is a cherished comfort food for the Inglins.

My mother was a phenomenal cook and she too made Noodle Pie to carry on the tradition. She liked to tinker with recipes and while her variations were good, this one seemed over time to be a bit removed from what I remember my grandmother making. Putting noodles in a pie seems a strange construct, but when done right is a complement and not weird at all. I remember my grandmother’s pie having noodles throughout but they were part of pie and gave it form but were not overly noticeable.

When I was old enough to want to relieve the nostalgia of this recipe, I asked my mother how to make it. By this time her recipe had evolved and like so many things, what she had documented and what she actually did when assembling the pie usually far apart. She had a feel and never referred to her recipe cards. None the wiser, I made the written version several times only to be disappointed with the results.

I put the recipe aside and didn’t make it for a long time but deliberated that if I did it again, I would seek to adjust it to make it more like Nans. I knew what it should be like but the balance and textures were wrong. One of the bigger problems with moms shared recipe is that she relayed to make it with cut up lasagna noodles and they were too heavy and overpowered the texture and flavor.

A few years ago, I decided to give it another try. Without access to mom or nan, I thought I would do some research to see what was more traditional and likely closer to the traditional pie I remember.  I was seeking a texture that would be smooth, akin traditional Italian cannoli filling, and not dense like cream cheese cheesecake. I felt as if should be creamy like a cheesecake but not as dense and rich.  It would have a balanced complement of light noodles, fruit, and I touches of chocolate chips throughout. I would know if I had it right when it was overly dry or overly sweet,  and fell somewhere in the middle.  A hint of lemony citrus flavor, vanilla notes, and some differing textures to contrast and play off the often neutral ricotta base.

Variations of this kind of pie originate from different cultures. Desert versions exist the form of a Jewish Kugel. The Hungarians have Vargabéles… but the closest to my grandmother’s Italian heritage is the Italian Easter Pie. It has similarities to a ricotta cheesecake with some elements of a fruitcake resplendent with candied fruits, citrus zest, and nuts.

This is where I landed after some tweaks.  I switched the recipe to a thin ribbon type egg noodle that provided evidence of noodles but did not overtake the pie.  I incorporated a mix of chewy dried fruits, or Maraschino cherries (depending on the mood), along with some toasted nuts for texture.  I replaced the traditional citron with some citrus rind to give it some zest and contrast the neutral ricotta base. Perhaps I modernized the recipe a bit upping the sweetness and textures with including more fruit and toasted nuts then my Nan might have but I feel like the balance was right that everything was well proportioned and distributed in the ricotta base.  Most importantly the noodles are in the right proportion and a complement to the final pie.

I’ve made this several times now and other than swapping out cherries for dried fruits sometimes, it has come out well. There is some debate about whether it should be in a pie crust; to me the answer is yes, I like it that way so I make it pie crusts that come from the other side of the Inglin family – Nanny Ketchum’s ‘Fluffo’ [aka butter flavored crisco] recipe. My mother’s maiden name was Ketcham and all of the Ketcham’s made killer pies.  How’s that for blending the best of both worlds.

I made this for the 2018 Inglin family Xmas and it was spot on. My favorite thing to do is have the uneaten wedges for breakfast on the days after Christmas.

A final note to close out the story. At some point I think I’ll have to go back to the full tradition of this pie and make it with Citron and candied fruits. My Nan used to make it traditionally with candied Citron, a lemon like fruit that has an essence of lemon but bit of bitterness akin to grapefruit. That would – good, bad, or indifferent, bring it right back to the Sunday dinners of my youth.

* I would not begrudge anyone from using a pre-made pie crust.  No harm in that at all. 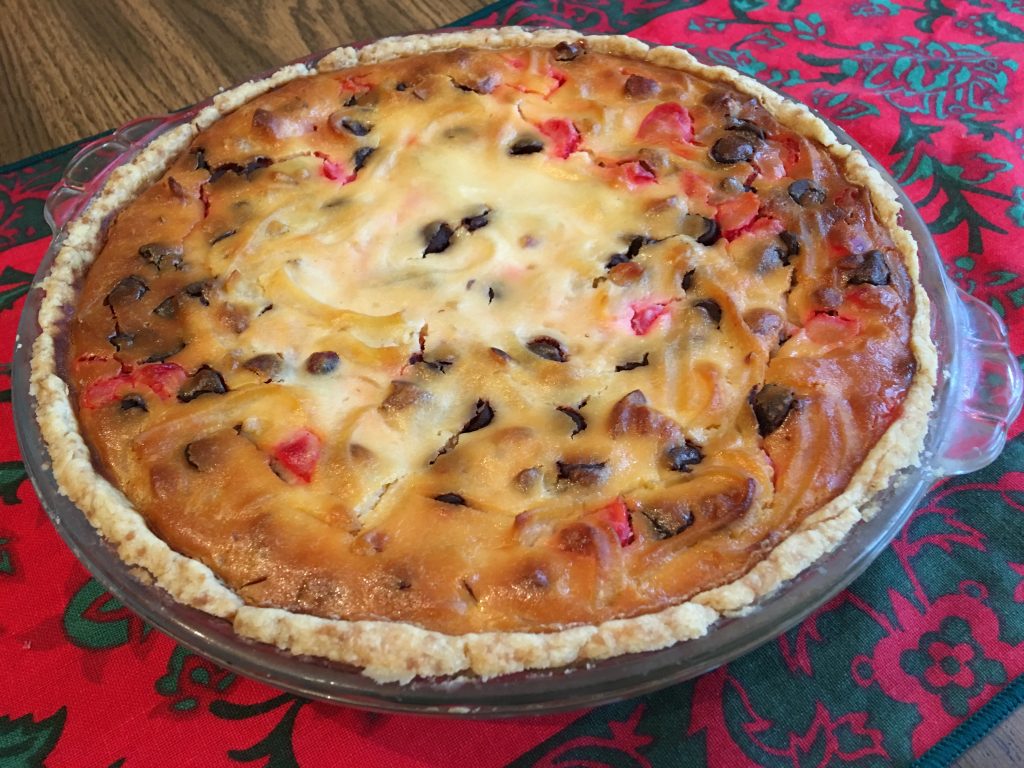